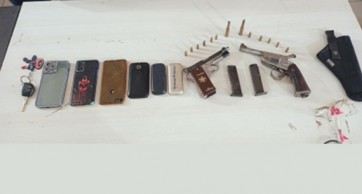 A country-made 'tamancha', a country-made pistol, a magazine, and live ammunition were seized from the accused arrested under the limits of Miyapur police station of Cyberabad Police Commissionerate, an official said.

On receiving credible information that some persons carrying weapons were passing through Manjeera Pipeline road, Miyapur, police launched vehicle checking. A person who tried to escape leaving behind his two-wheeler was caught.

Police recovered one tamancha and 9 bullets from Swan Leonard alias Kanna. On his information, police arrested his two friends and a pistol and bullets were also seized from them. Two other accused were identified as Chintakindi Sairam and Gopagani Sai Krishna.

Leonard, a native of Tamil Nadu and resident of Boduppal in Medchal district near Hyderabad was working as Swiggy delivery boy.

He was arrested in the past in five cases under the limits of different police stations of Cyberabad and Hyderabad. He was booked for extortion, planning dacoity, trespass and possessing illegal arms in 2014 and 2015.

Two other accused were arrested earlier on charges of attempt to murder, rioting and trespass.

One country made pistol, one magazine, one 7.65 mm ammunition was seized from Sairam while a magazine and three live ammunition of 7.65 mm were recovered from the third accused Sai Krishna.