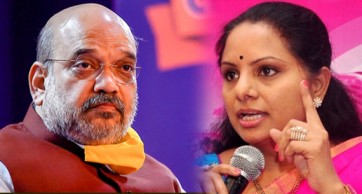 Hyderabad, May 14 (IANS) Ahead of Union Home Minister Amit Shah's arrival in Hyderabad on Saturday, Telangana Rashtra Samithi (TRS) legislator K. Kavitha has posed a few questions to him.

Resuming from where her brother and TRS working president K.T. Rama Rao had left, Kavitha took to Twitter to ask her questions and mount a fresh attack on the Centre over its failed promises to Telangana.

Shah is scheduled to arrive in Hyderabad in the afternoon and is due to address a public meeting at Tukkuguda in the evening.

In a series of tweets, Kavitha first welcomed Shah to Telangana, and then said "please tell the people of Telangana when will the Central government clear the following: dues of Finance Commission Grants: Over Rs 3,000 crore; Backward Region Grant: Rs 1,350 crore; GST Compensation: Rs 2,247 crore".

On Friday, KTR wrote an open letter to Shah, posing 27 questions on the failed promises and the discrimination towards Telangana.