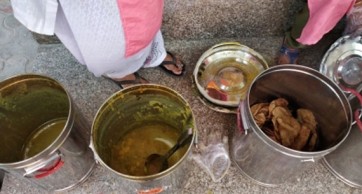 Hyderabad, Sep 6 (IANS) As many as 33 students at a government-run girls' hostel in Telangana's Warangal district fell ill due to food poisoning.

The incident occurred at the hostel of tribal girls' Asham high school at Wardhannapet on Monday night.

The seriously ill girls were shifted to the MGM Hospital in Warangal. Thirteen students have been admitted to a special ward. Doctors said their condition was now stable.

A girl undergoing treatment at the hospital said she noticed a dead lizard in the food and stopped eating. Though she informed the in-charge, he told her that it was not a lizard but a green chilli. Few minutes later, several students started vomiting and also complained of stomach ache and loose motions.

A total of 33 students were taken ill and 13 of them had severe symptoms. The officials shifted them to the MGM Hospital and worried parents of the students rushed to the hospital.

Education department officials have ordered an inquiry. They said strong action would be taken against those found responsible.

Meanwhile, BJP state president Bandi Sanjay demanded that the affected students be shifted to Hyderabad for better treatment. He claimed that 60 students were taken ill.